Bahu shedding tears while Saas lashing verbal whips. "Arre o kalmuhi...baap ka ghar samajh rakha hai kya? yahan muft ki roti todne aayi hai?" . Wife questioning her husband with a drop of tear at the corner of her right eye, "Batao, kal raat tum kahan thhe...arre tum kya bataoge!!! (pointing her palm straight at her husbands face)...tumhari khamoshi, tumhari yeh jhhuki hui nazar sab bayan kar rahi hai... aisa kaise kar sakte ho tum Mihir...aisa kaise kar sakte ho?" (four drops of tear from right eye and some from left eye, carefully preventing the fifth drop from trickling down in case it smudges off the eyeliner or the muscara). Smile showing only seven teeth that too of the upper jaw. Eyeshadow and foundation even when coming out after bath. Straight silky black hair with relatively less makeup indicates that the character is a protagonist. Stringed blouse, bright  and matching coloured bindi and sindoor depicts the wicked vamp. Skewed eyes and often monologues ensures that this has to be the vamp, no other thoughts. 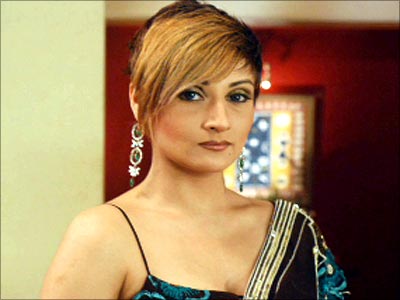 The  most common phenomenon in almost every house in the country which can afford television. Television soap operas have successfully hooked up the Indian wives (and therby their husbands). They come every evening, five days a week (wives won't mind even if it's seven, husband would also agree for they won't have to take their wives shopping). Almost all the houses in the country which can afford a television, spend their evening with the ever weeping bahus, torturous saas, dhokebaaz (or too loving and caring) pati, conspiring sautan, illegitimate children.

No matter which channel you put, it's all the same.As my father puts it, all of them has the same core, "Shaadi and barbaadi".  It used to be a big chandelier hanging living room with most things in different shades of red. The typical of the Ekta Kapoor serials. A husband married to the protagonist and antagonist at the same time. Children popping out  now and then entangling the already over entangled relationships. Characters never grow old. Only a streak of white hair (specifically trailing from the forehead to middle of the skull) and spectacle, a mustache at max, distinguishes one generation from another generation. Immortal Baa, ever (over) prayed Thakurji gives some religious touch to the story to keeps the aged wives, reason to forget their gout  pains.

Things have changed after the Ekta empire collpased. Now, the main  mantra is a village. Peril of simple village girls and ladies have worked wonders for the TRP seeking television producers.  Village girls no matter what, wear designer cloths from West Side or Shopper Stop. Hungry family with smoking tava on the chulha (earthen oven) but with lands grazing till the horizon. Men showcasing their mardaangi in dhoti and kurta rather than safari suits. But one thing is for sure. Their would definitely be a Zamindar and all the shoots would soon shift from the chulha blowing huts to the luxurious villa. No matter how poor the protagonist be, she'll land up in the Zamindar's house within twenty episodes.

And if you are bored of watching the same old serials, there are reality shows at your rescue. Challenging the celebrities (those who manage a role in the serials for a year or two, self proclaimed audience heart throbs) to perform tasks. However, these are no less than the soap operas. They have emotions, drama, fights, romance and what not....The once saree and jewelry clad bahu betiyaan get the golden opportunity of showing off their well maintained (sometimes flabby due to prolonged break from work) body contours. Reality shows recently have taken up the job of Rab for finding and uniting  jodis. Celebrity bachelors and spinsters approach the reality shows in search of their soul mates. The country exercises its voting rights (democracy you see...yes the same that the country uses for electing our most eligible ministers and MLAs) to choose the bride or groom for them.

Channel producers have always figured out plots to keep the common Indian wives of all ages forget the rest of the world. Forget about the quarrel she had with "baaju wali Mrs Sharma", or son's poor marks in SUPW classes or gossip about "Mrs Gupta ki beti Mrs Shukla ke bete ke saath bhaag gayi" or complain about the maid coming late or even the burning roti on the gas stove. Forget the world to engulf the emotional melodrama. Sympathize with the tortured bahu, hate the wicked sautan, die for the handsome dewar, idolize the ma , envy the caring husband.

No matter whether the Women Reservation Bill is passed in the parliament or not, one thing is reserved for the Indian women. The Television, every evening from 8pm to 11pm.

spontaneous and random thought processor
Does the name sound nerdy? Well, after so many years, I realized that this is how I can be best described